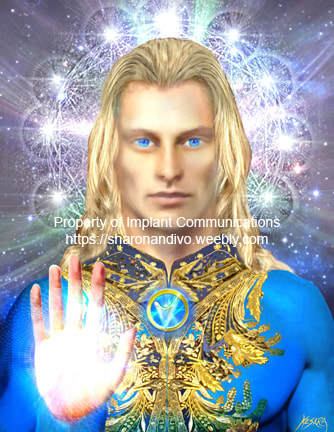 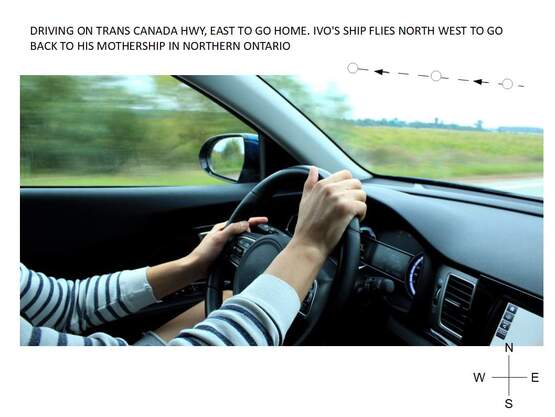 ​I drove around for a while, looking for streets with no hydro poles.
Fat chance, really. I told Ivo I was going home and as I drove down
the TransCanada highway I saw his ship again, flying at warp speed
in a northwesterly direction, which is where his mother ship is. It's
funny to think of all the trucks and cars on the highway driving along
​oblivious to the fact there's a UFO flying above them.

(The second of three times I'd seen him recently)
I went back home and thought about it and realized I had to find a piece of land that's still off grid. What kinds of places could be off grid still? I thought about the one lake we have near me, and then the conservation areas where people go hiking on trails. I went out during the day to check these places out and it turns out I found one that was suitable. Perfect, in fact. It's a conservation area.

While looking for this conservation area, I realized that I need a GPS app because I'm terrible at even following my own directions. I got lost. I drove down this one country road which I thought was the road of the conservation area, and it had a tee at the end. I figured I'd driven too far, and turned around and went back. I drove up this one driveway thinking it to be the conservation area, and realized it was a home with a long driveway. Ivo exclaimed, “This is perfect!” Yes, perfect it was for a landing because the home was obscured by trees and the people would be sleeping anyway that late at night. I drove up the driveway and did a three point turn to turn around, and ended up in a ditch on the side of the driveway filled with snow. The owner came out and he had service. Really, what good is a cell phone when you don't have a connection out in the country? Mine doesn't. He called a tow truck for me. I waited an hour and then got pulled out of the ditch. Even with front wheel drive, the rear of the car was sinking. There was no getting out without help.
​
I was extremely happy with my reaction, though. All the things that Ivo talks about in taking your mind back from fear in our video's – works! I was probably the happiest stuck person any tow truck driver has ever come across. Most people are consumed with the fact that it wasn't supposed to be like this and then they get into a snit. I didn't. I just enjoyed being out in nature, and I was confident that all would resolve itself. I wasn't even out of pocket because I have a plan with my car dealership. Five years of towing comes free with the purchase of a car with Kia.  (I'm not really plugging Kia but I think it's a good brand. I've had nothing but luck with "The Mouse.") 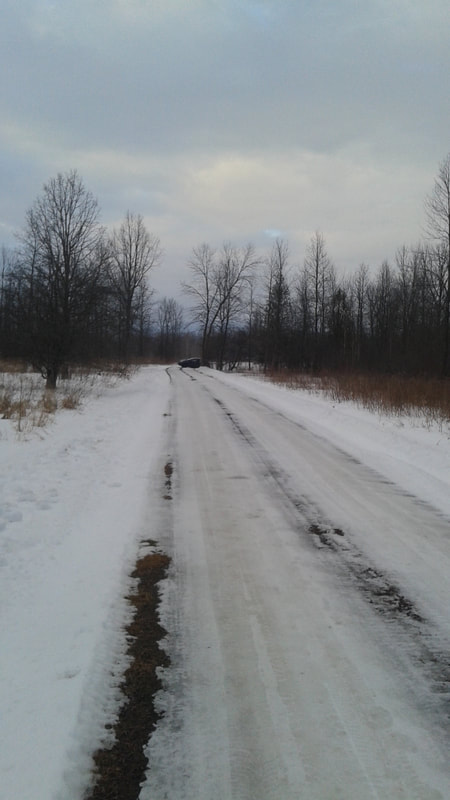 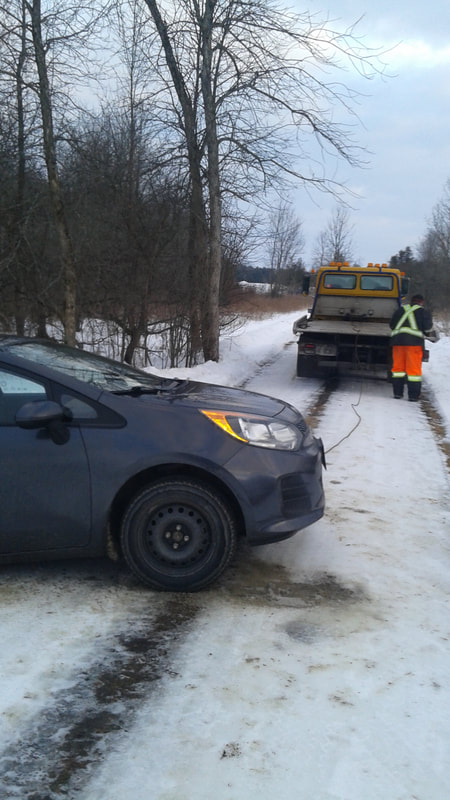 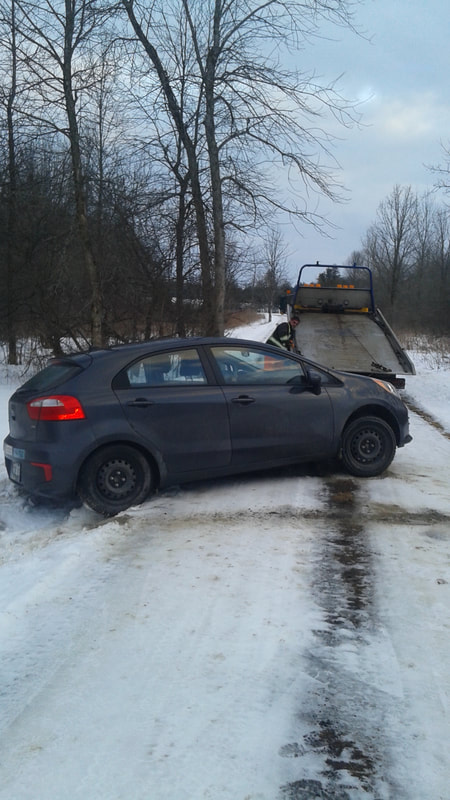 L. The perfect spot, house is way back behind the trees. M - my favourite truck driver   R. "The mouse" gets towed out. Black dirty marks are from kitty litter I put down to get traction. Didn't work! 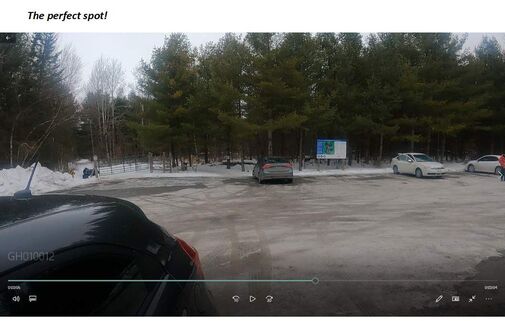 So I went home and checked where I'd gone wrong and ventured out the next day. I found it. I found the spot. No homes, no hydro wires, a large plowed parking lot and no cars late at night. Perfect!
I waited and repacked, packed my house because I'll be moving anyway at some point. Got my neighbour to help with Merlin, and then went out last night.
I figured we'd thought of everything: hydro poles, traffic, houses.... I knew Ivo was dealing with avoiding radar and military jets.
One thing I didn't think of: I parked in the parking lot last night. I looked up and asked if he was there. He said, “Yes,” and I saw him. I wanted to do this yesterday because February 14th is Ivo's birthday. I thought it would be nice for him.
When I pressed him to see what was taking him so long, he said, “There are six draconian and reptilian ships in the way, my love.” Oh yeah, didn't think of that. Now he's engaged in either a stand off or a battle with reptilian ships. Turns out it was a battle. Ivo won't shoot first. They have to and they did.
I'm sure Ivo has back up with him and can call for more. But I alerted Commander Erron, who patrols this area, and then Soren of the Pleiadian Delta Forces to help.
​
There's some history to this: Throughout my life, the Negative Alien Alliance has worked tooth and nail to ensure that Ivo and I never connected. The Archons hate twin flame relationships – all of them, and they work hard to keep you apart. If you're both incarnated on earth, they'll work hard to make sure you learn to hate each other or that a relationship between you doesn't work out. They have their ways, believe me. If you're like Ivo and I, they will work hard to make sure you never wake up and start using your telepathic abilities. Well, that didn't work. Now they are a physical barrier to us being together.

I'm hoping Ivo can think of a way to circumnavigate this problem. Why should they be a barrier to our being together? They haven't stopped us yet, so why now?
What's more, Ivo promised me before I came to earth that if I was ever in a life or death situation, he would rescue me. And he has before. He helped me survive a car accident three weeks after I got my license, at 16. He has stopped many accidents and other attempts on my life that I don't even know about. So now I'm in trouble again, and he is thinking he can't help me. I'm sure he'll come up with a way.

(It also didn't have wings! or engines!)
As for the Reptilian/Draconian ships, I thought, “This can't be! Am I going to believe this even?!” I kept looking up to see what was going on and there were clouds so that made it more difficult. I can read a clear sky with “stars” pretty easily. I can see ships there all the time. But clouds are a different story. Especially those thick blankets of chemtrails like last night's.

I looked up and saw his ship hauling it across the sky. His ship appears like a star because that's how they cloak them, they camouflage themselves, but I did see it peeking out at times behind a gap in the clouds. Their ships twinkle more than stars do, folks. That's one way to detect them.

But reptilian ships? Really? I looked up again, this time trying to see what was right above my car by squishing my face against the driver's door window. Yes, I saw one! A dark ship, long with a vertical fin-like tail at the end, which pointed upwards. It was there.
​
I sat in the parking lot, thinking about the firefight going on above me. I thought it best to leave as Ivo didn't sound too positive about tonight's situation, and drove home.

I've kept my bags packed because I feel I may have to leave in a hurry one way or the other. We may give this a try again or he may use other means to get me to safety. An image of all the Venusians who are walking around among us flashed in my mind. Or Agarthans who are here, same thing. He could involve them and get their help. They're here living in safety, but they're safe because they have all their human faculties, never mind are being watched by their space brothers. I'm being watched by the space brothers, but I certainly don't have all my human super skills. That leaves me vulnerable.

Another plan may come to fruition.

Another thing I'm going to look at is moving to another province. Why? Because apparently there are premiers who are speaking out against Trudeau's federal government. I have to discern if this is the same old same old two party politics or if some of these premiers are actually working for the people. I know Ford isn't and he's my premier. Neither is Legault so Quebec is not an option either.  Life in other provinces can be much more affordable than Ontario.

Of course they know! They're telling you ... it's right in front of your eyes because THEY PUT IT THERE
Hang on … I'm getting a report on last night's battle. ….
Me: So you took the six ships, didn't you Ivo?
Ivo: We did, my love. Nothing to worry about.
(Intuition: Six increased to more than six after the battle started – they got reinforcements as did our guys)
Me: I wasn't worried. LOL I'd worry about you driving a car more than you flying a saucer! Besides you probably can't even fit into my car. LOL
Ivo: We took the six ships. Commander Erron did send out a bevy of saucers to help us. My crew came for the battle as well.
Me: How many were there up there?!
Ivo: Around a hundred ships.
Me: Holee!
Ivo: We boarded the main draconian ship and arrested a fugitive we have been looking for for many many years. A female, in fact, her name is Blerius. She has been a thorn in my side on many occasions and has been instrumental in the draconian work against you.
Me: Good. Maybe that will free up some of the troubles I'm having with moods and attacks.
Ivo: Perhaps.
Me: How long did that battle go on for?
Ivo: Well into the morning light, my dear.
Me: Wow. It was one a.m. when it started. What did you do with the draconian female?
Ivo: She is being questioned. So far she is not cooperating.
Me: So you're going to talk to Ashtar about getting me off the planet, then?
Ivo: I will. We will let you know when we have another plan.
Me: Good! Thanks Ivo.
Ivo: My love, your dedication and devotion to this plan is noteworthy.
Me: Thinking there's a battle going on above me and then seeing a reptilian ship is noteworthy. I take it one day at a time, Ivo.
Ivo: Very good.

What I believe is they showed up last night and not before because we actually had found a way to make this work this time. The only way they could stop us this time was by physically creating a barrier, and they did. I believe they have been watching and waiting all along. 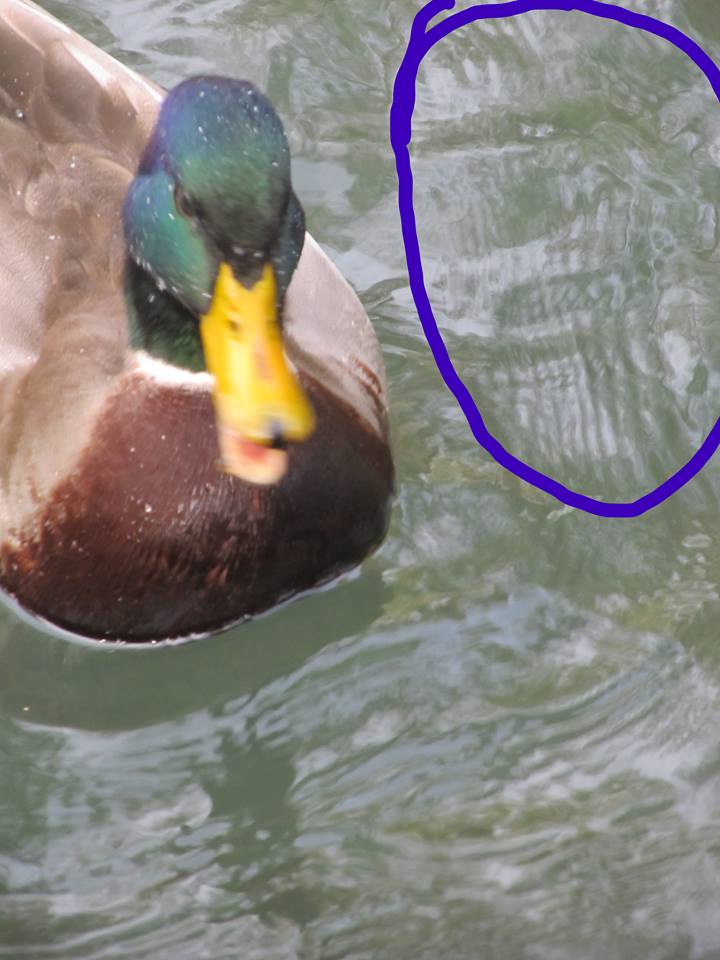 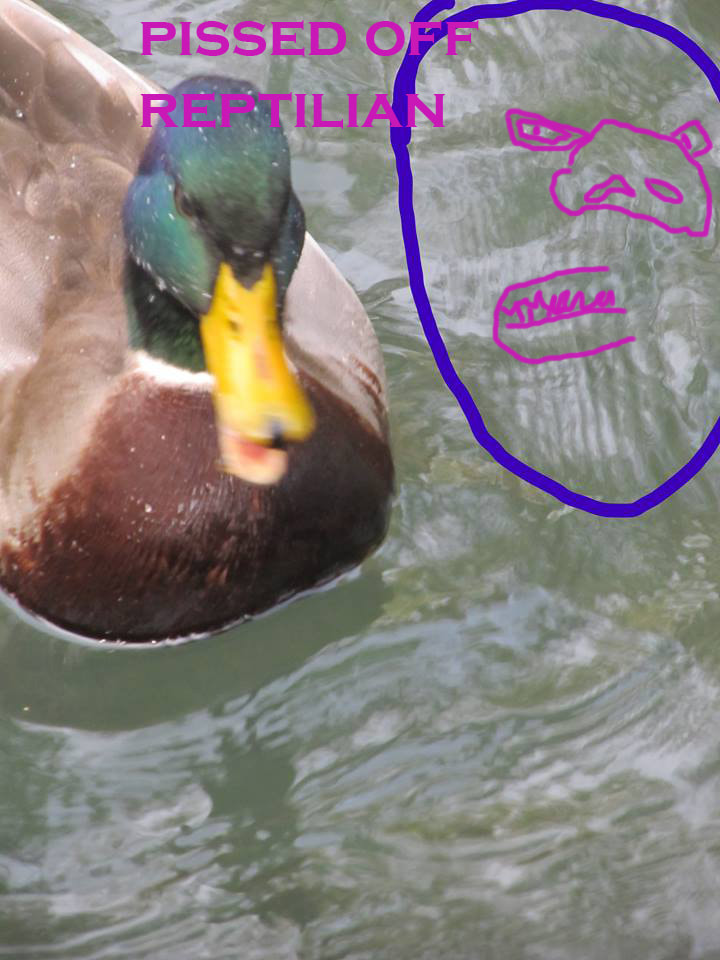 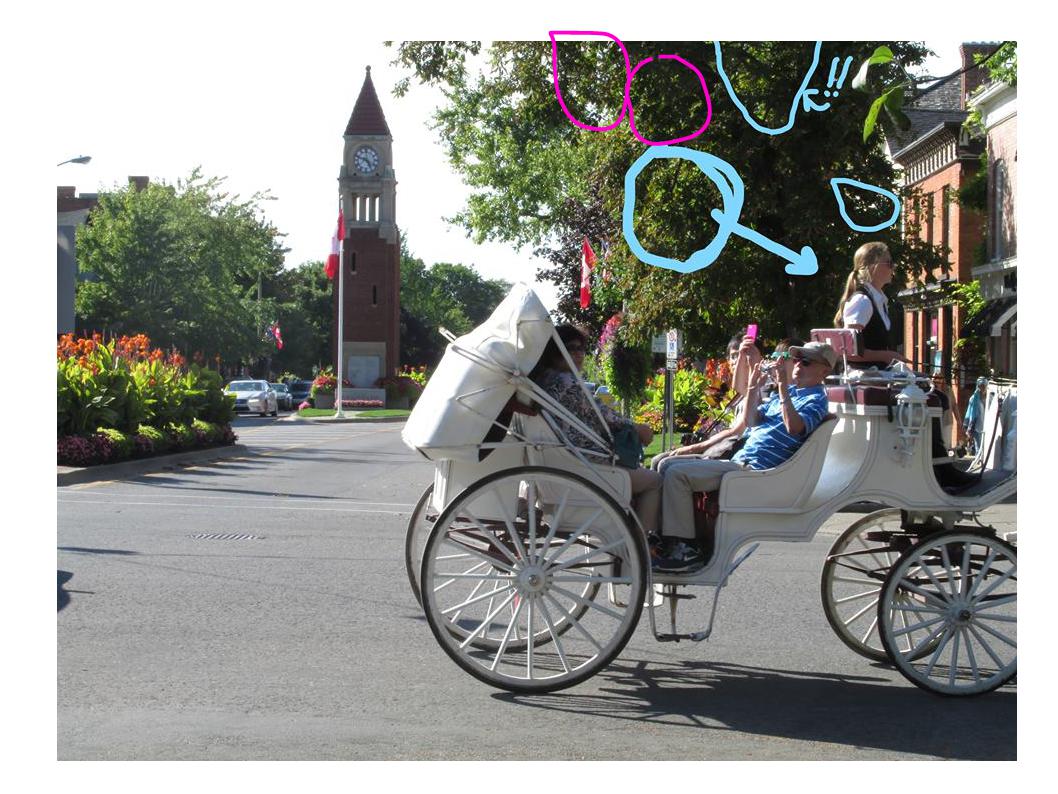 Yes, reptilians and draconians exist. I see them in nature.  For more of these images,  visit our other website under the "photo gallery" page.
sharonandivo.weebly.com/photo-gallery.html