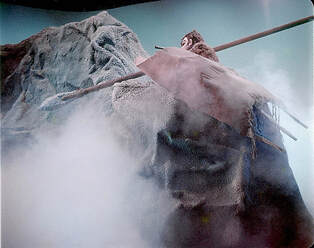 Sharon upon being confronted with pro-vee stance. Gotta work on that! Stay unflappable.
October 25 2022
So today I went to see my oncologist. He dropped a bomb on me. He said that my cancer is NOT pancreatic cancer as they originally suspected, but rather gallbladder cancer which has metastasized over to the liver. Either I jumped timelines and changed the nature of my illness or they made a big boo boo that frankly doesn't help me to trust them any more than I already don't. I let fly a barb this morning when he asked me if I'm up on all my c***d shots and I snorted, "No! But how about that? I won't let the vee kill me so cancer's decided to take on that task instead."  His reaction was interesting. He didn't disagree. He seemed to have no opinion and let the subject drop. Who knows? He may be sick of hearing about it like everyone else is right now.  By the way, they CANNOT refuse me medical treatment because of my anti-v status.

If I can change the nature of my illness maybe I'll shoot for toenail cancer instead next time. I probably didn't  but I'd like to think I could. Make it my left foot because I drive with my right foot.

This one change indicates to me that I have to be very limiting with fatty foods. The gallbladder processes fats and if you're eating too much of them with a malfunctioning organ, well... you can't expect much but pain I suppose.

Anyway, so now they've done an endoscopic procedure already based on the wrong diagnosis. They said that the pancreatic tumour was choking off the bile duct. Well, it wasn't because I have no pancreatic tumour. Something else was doing that.  However it seems to be helping me and frankly it doesn't harm anything so fine.

I now have another whopping resentment to deal with because 3 years ago I went into emergency complaining of my gallbladder. The doctor took an x-ray, told me I had an ulcer and if I had anything wrong with my gallbladder I'd be in as much pain as the man in the next cubicle because he had stones. Well, I'd love to run into that doctor again and tell her to be a bit more open minded. I'm sick of condescending doctors who think the person who's actually in the body is clueless about their own pain and has been reading too many medical websites.

I went home and fell asleep and it was the kind of sleep you long for... I WAS NOT HERE. I left my body and checked out for 5 hours of absolute dreamless rest. I know whenever that happens that I'm up to something astrally or etherically so I'll see what develops over the next while. I believe that kind of sleep is always worth noting. The cat didn't even wake me up at 5 p.m. looking for his dinner, I was sleeping so soundly. I can tell, so far, that I'm in a much higher vibration, far better mood so something was done when I was gone.