Our History: What Was Olympus? 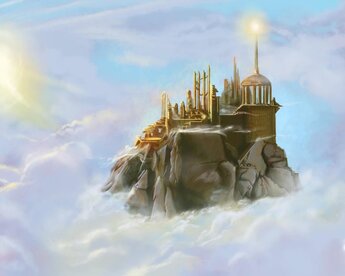 March 24, 2022
Looking at a map of Pangea. I say it's not correct because there's no Atlantis, which we know existed. Athena tells me that Atlantis came up when Pangea broke apart to form the continents we have now. Olympus is one of the advanced prehistoric civilizations so often fantasized about, but written about by scholars and psychics. I believe Plato may have been one of both.
So Olympus, where they lived, had to be long ago, long long ago, before Atlantis or possibly during Atlantis. Atlantis fell around 10,000 BC.
Olympus was a beautiful city, Athena tells me, in the valley surrounded by mountains. There was only one home at the top of the mountain in the skies and this was occupied primarily by Zeus. Olympus was like Atlantis was. They made city/states, they didn't settle the land like we do now – they all lived together and everyone had access to all amenities, they didn't build some cities to be great and other cities to be less than like we do now. Everything was equal for the people who lived in the city/states.
She told me that Olympus was in what we call Europe, it was in Greece. There are mountains in Greece now but not half as large as the mountains at the time of Olympus. She says that Mount Olympus was their home, so we haven't lost that piece of history. That's where they lived.
Apparently, they've been trying to raise the frequency of earth for a while and Olympus was the same as Atlantis – they sent in their starseeds – the Olympian gods and goddesses – but they were unsuccessful. The ruins are still in Greece now. Many have been reconstructed throughout time but you can still find some of them, she says.
This explains to me, why someone like me would be here now, the incarnation of Athena, as well as the people who used to live in Atlantis. We've been trying to do this for a long time, it seems.
The trouble is, though, with the lower frequencies than the Olympians were used to, their behaviour started to change and they began to live afoul of the Law of One. So you see a lot of the things they did, such as competing with each other and committing adultery were not done before they came to earth. The lower third dimensional energies are troublesome for everyone, and I believe there could be more attempts to ascend the planet that ended in tragedy. But this time it's going to work.
The people of the galaxy have eventually learned not to send their own here for very long because their DNA begins to change and they start to reflect third dimensional tendencies. Although he regards very highly those that do come here from higher dimensions, Ivo won't step foot on this planet and stays out of the lower energies. Yes, starseeds are seen as heroes by people in the galaxy.
Athena says Olympus was a tropical land, it was very warm. She shows me they used to eat oranges.
She also says the rumours of her popping out of Zeus' head are false. She had two parents, who were both Lyran starseeds – Zeus and Metisaere. Your names are a bit different, she tells me.
She says Olympus was flooded and the people either died or left before they too, went with it. I'd say God has a bad habit of doing that. I keep hearing about cities that were created to ascend the people and when ascension fails, then the city is destroyed and we start from scratch again. Maybe God didn't do it, but our negative energies brought it upon ourselves. Who knows?
Athena tells me that Zeus came to earth to set the Titans straight, and he and his children did exactly that. The Titans were another race of people from the stars who came to earth and failed to ascend. So they were made to be followers of the teachings of the Olympians, who soon enough, took the same path in life.